RACC is supporting this Western Environmental Law (WELC) suit filed November 18, 2016 against the Bureau of Land Management (BLM) and its parent agency, the U.S. Department of Interior as well as the U.S. Forest Service (NFS) under the Department of Agriculture, for inadequate analysis of potential environmental impacts as required by the National Environmental Policy Act (NEPA). WELC filed the litigation on behalf of a coalition of Citizen Groups connected to RACC including the San Juan Citizens Alliance, Wild Earth Guardians, the Sierra Club, Amigos Bravos and Natural Resource Defense Council. RACC supported the litigation by providing briefs from two local RACC Board members, Barbara Turner and Cinda Graham. Peggy Baker served as liaison with WELC to provide detailed criteria for these Standing Declarations. The briefs were needed to show “standing” to sue, specifically showing harm if oil and gas exploration and development in 13 NFS parcels near the San Pedro wilderness are allowed go forward without a substantially more rigorous environmental analysis. RACC members provided 2 of the seven briefs showing standing to sue and potential for harm. Your voice does make a difference! For many of us in the Rio Chama area who have engaged with the fight to keep oil and gas out of our watershed, there can be periods of feeling a little hopeless about the struggle. We are here to tell you that your voice does make a difference!! It may not be immediate, but pressure from you, consistently applied, can have big benefits down the line. Just a few years ago, a handful of locals in the Abiquiu area decided to engage with the BLM and Forest Service in an effort to protect the watershed. More than a hundred comment letters from you were delivered to the BLM regarding our concerns about oil and gas development in the Rio Chama Watershed. Fast forward to today and Rio Arriba Concerned Citizens is “small but mighty”, as we say here at RACC, and still very committed to continuing to fight to keep our watershed pristine and intact. We currently have no oil and gas development in the Rio Chama Watershed and we can all feel grateful for that. RACC is now connected to six other successful environmental groups in New Mexico (Sierra Club, Wild Earth Guardians, Western Environmental Law Center, Greater Chaco Coalition, Frack Free New Mexico and the San Juan Citizens Alliance) and we will continue to speak up with you and for you. Did any of the comments we submitted to the BLM make a difference in the end? Yes, they did! Oil and gas parcels near Cebolla, New Mexico were indefinitely deferred. The volume of protest letters from our area also helped inspire Western Environmental Law Center to get involved and they recently filed a lawsuit with BLM, Forest Service, Dept. of the Interior, and the Obama Administration regarding 13 parcels on the western border of the Rio Chama Watershed that are now open for leasing. Are there any examples of pressure from communities like ours stopping or slowing down oil and gas development? Yes! 25 oil and gas leases were canceled in the White River National Forest in Colorado due to “endless pressure, endlessly applied” by a community that organized and kept demanding their voice be heard. Alongside effective legal advocacy from Western Environmental Law Center they succeeded in protecting a place that they love. This is our strategy for the Rio Chama Watershed as well. Another example is Otero Mesa in southern New Mexico. The local community there worked for more than a decade to successfully safeguard Otero Mesa grasslands, which are considered the Serengeti of the Southwest, from oil and gas development. Their strategy of keeping the pressure on, over many years, worked. One more example is the new EPA standard around methane pollution. It was recently confirmed that the huge methane cloud over the Four Corners is indeed connected to oil and gas industry leaks in the San Juan Basin. Due in part to pressure, advocacy and education by environmental groups like ours, leaks from new and modified oil and gas equipment are now regulated. Because this rule has been finalized, it will take some doing for a new administration to unwind. So, take heart compadres, keep speaking up, and take any opportunity you can find, to protect the place where you live! 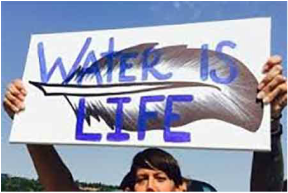 Resource Management Plan (RMP) Amendment for the San Juan Basin Provides Opportunity Scoping hearings have been reopened for the update of this BLM planning document, which addresses allowable uses of lands under its jurisdiction in the Farmington NM office. The San Juan Basin is deemed to cover a large expanse of land including parcels adjoining Native American lands near Chaco Canyon as well as parcels on the southeast edge of the basin into the uplifted lands within the Santa Fe National Forest, including drainage areas of the Rio Gallena and Rio Puerco which are in our watershed. The outdated RMP has not been amended since 2003 and does not include discussion of Mancos Shale and other adjacent formations bordering our watershed, nor does it address the dangers of new fracking technologies. The BLM and Bureau of Indian Affairs (BIA) have been holding meetings at Navaho Chapter houses to address many of their concerns, including the adverse impacts of fracking to air, water and cultural resources. At the first hearing November 10 at Shiprock Chapter House, BLM officials walked out as Chapter members attempted to give public comment. Criticized for disrespect, the BLM changed its meeting format to allow for public comment at all of these hearings. The scoping period has recently been extended for an additional 60 days, into February 2017. RACC will be drafting a template for anyone wishing to add scoping comments to address concerns. It would also be appropriate to use arguments and comments already provided to BLM protesting SFNF lease sales in 2015. These protests were all basically dismissed or invalidated by BLM at that time. Please keep speaking up so they understand we are aware and we are not going away! Look for our letter template in a forthcoming WATERSHED ALLERT from RACC, which we will send out to members on our email list well before the comment deadline.