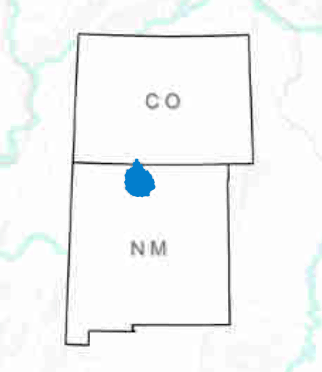 Where is the Rio Chama Watershed? 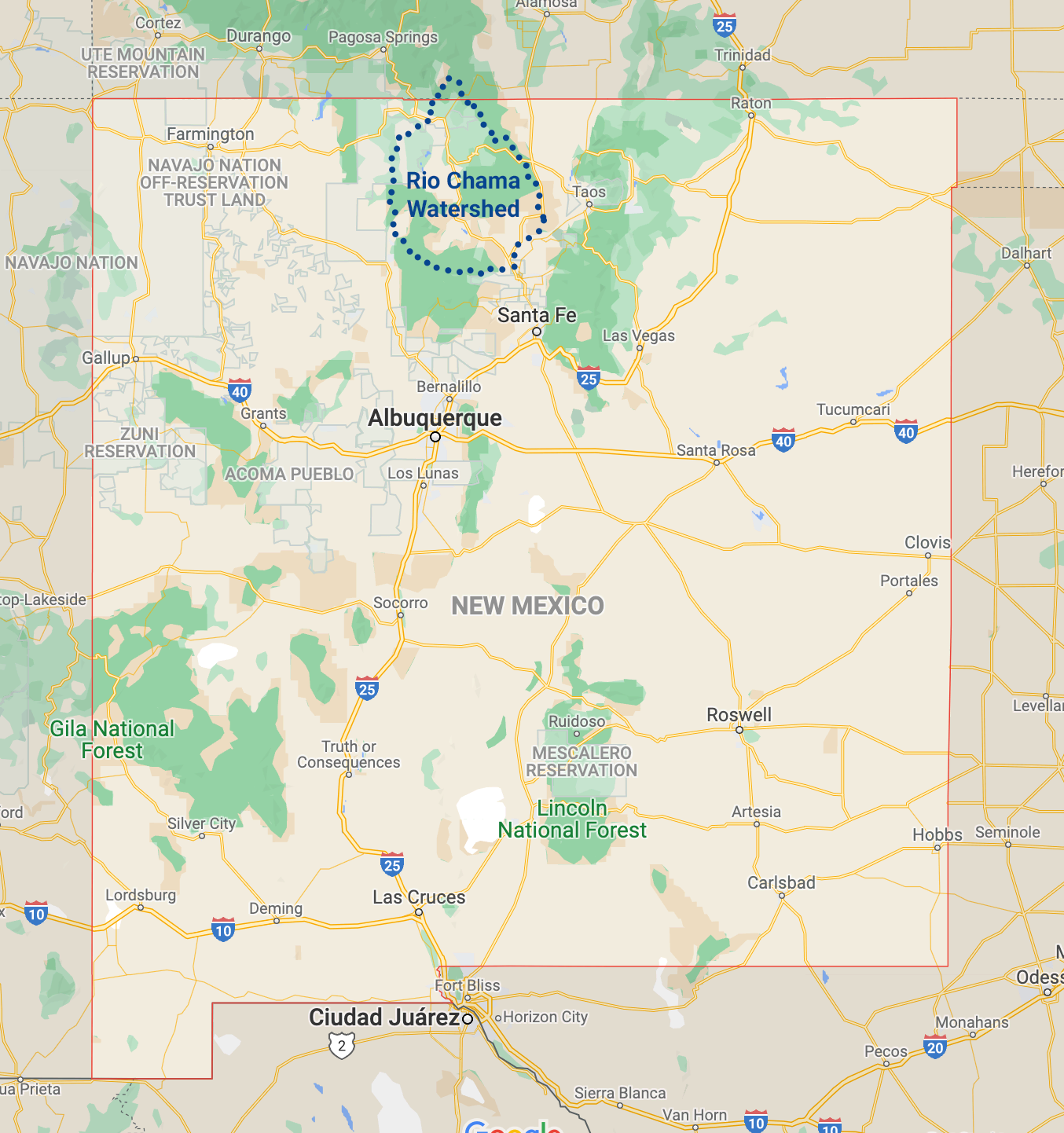 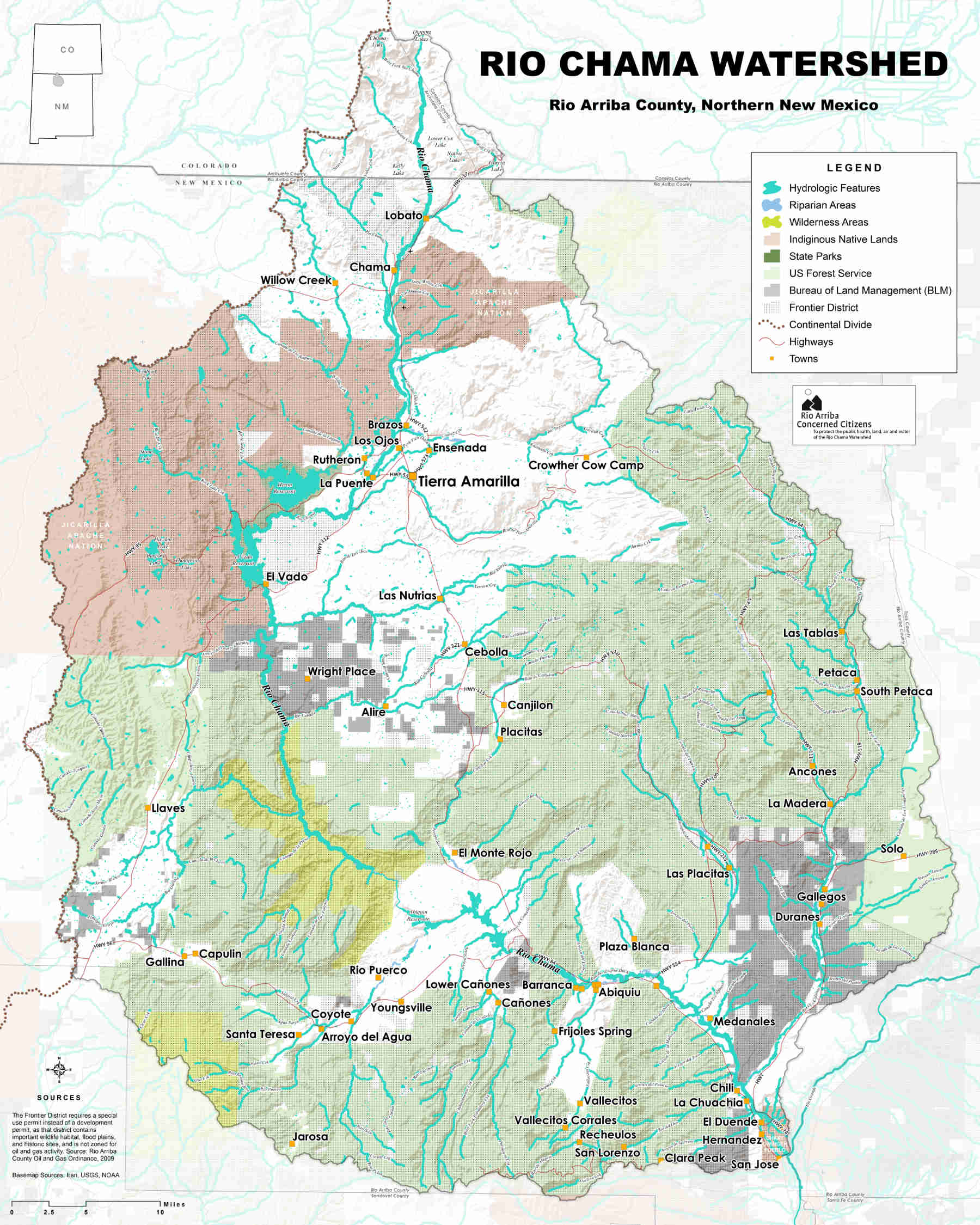 Why is the Rio Chama Watershed so Precious?

How do watersheds function? 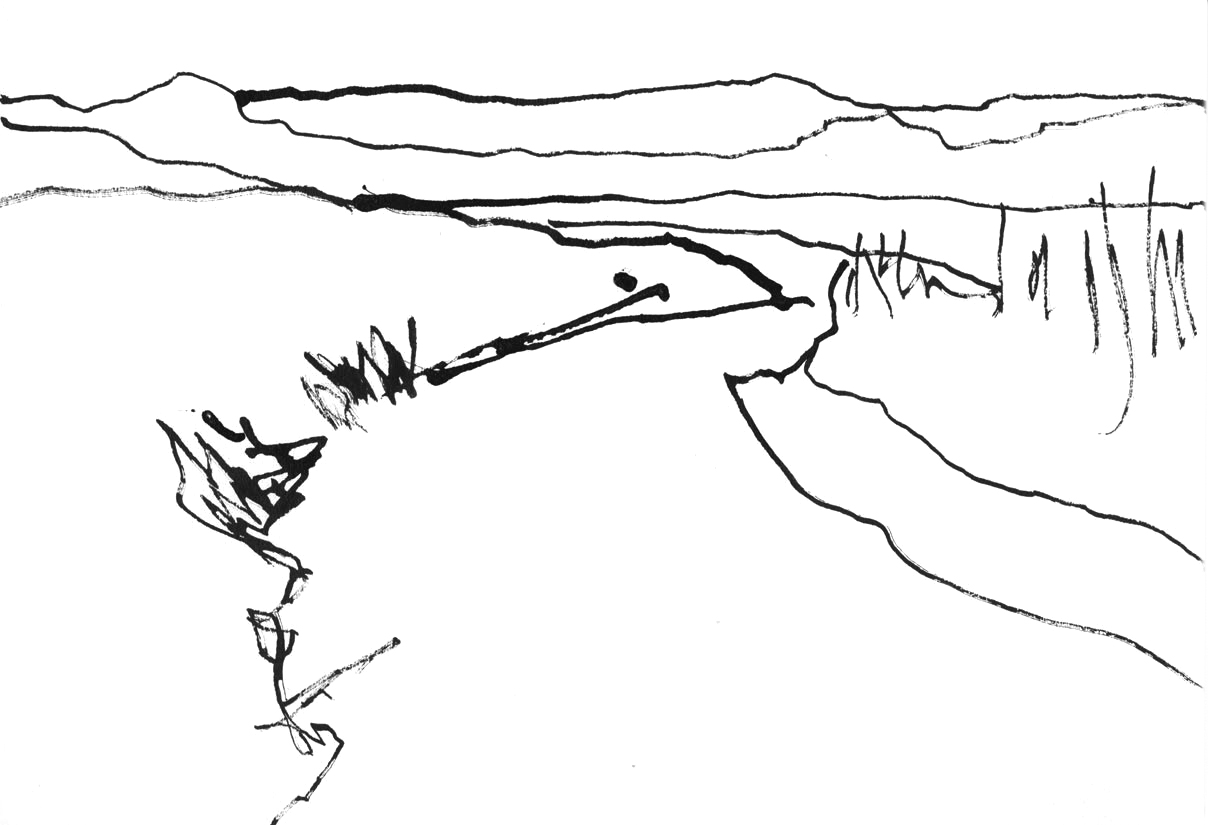 A watershed is “that area of land, a bounded hydrologic system, within which all living things are inextricably linked by their common water course and where, as humans settled, simple logic demanded that they become part of a community.”

A watershed can be described physically as a drainage basin that drains water from the mountains to a specific river, ocean or body of water.

The survival of all living things in a watershed ecosystem is dependent upon the cycling of water and nutrients. Plants and animals rely on chemical nutrients found in the soil to survive and it is the energy from the sun that supplies what is needed for plant photosynthesis and also for evaporation, which is essential for feeding the hydrologic cycle. Water moving through a watershed can cycle not only needed nutrients but pollution as well.

What are the components of the Rio Chama Watershed? 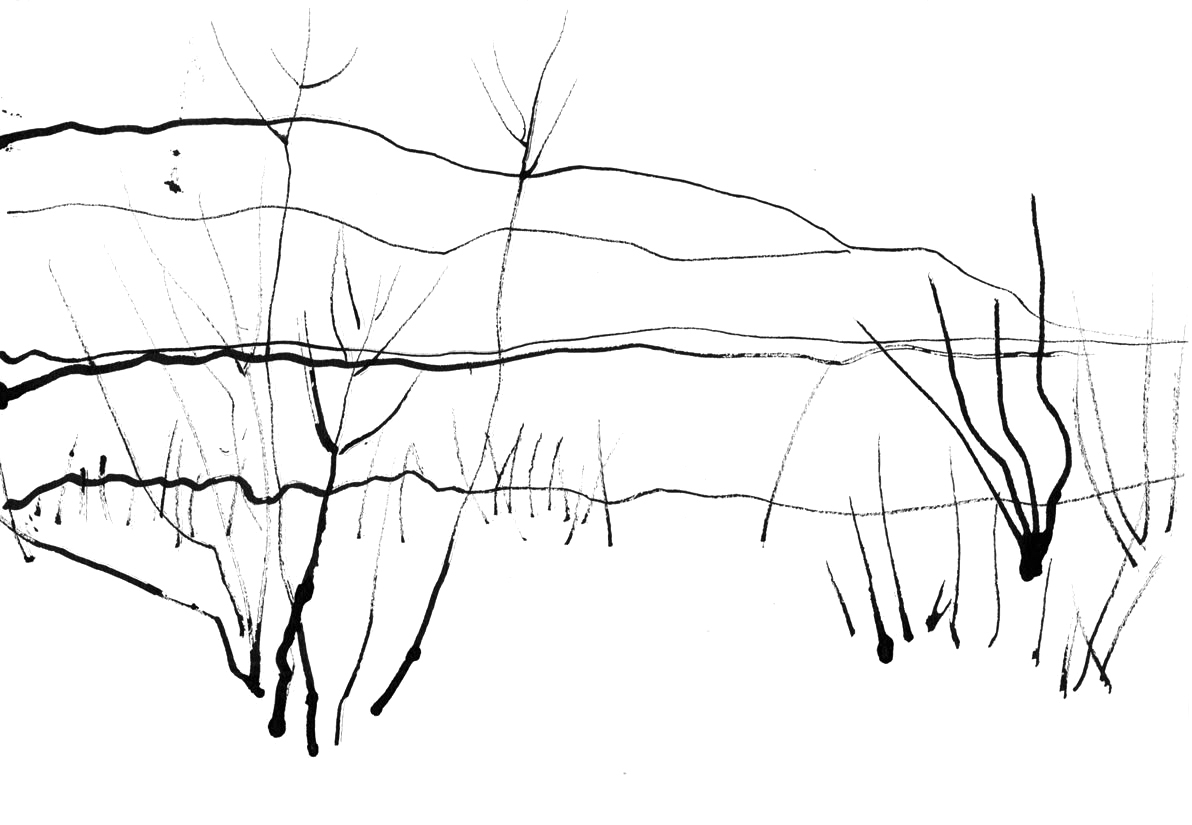 The late Juan Estavan Arellano, an unsurpassed and beloved researcher, journalist and writer of our region and our watershed who passed away last year, explains our watershed using the Spanish words that describe the shapes of our very own bodies. The mountains in a watershed are thought to be pregnant due to their rumores and hinchazones (bulges and swellings) and this is where the story of our physical watershed begins.

In the Rio Chama Watershed our headwaters begin from natural springs in high elevation basins in the San Juan Mountains in the far northern watershed near the Colorado border and eventually drain into the Chama River, an eventual tributary to the “exotic” Rio Grande River, which travels through a basically dry landscape to finally empty into the Gulf of Mexico. Our watershed is considered a sub-basin within the Upper Rio Grande Basin. The western edge of our watershed is defined by the Continental Divide, which separates our watershed (which geologically speaking is a platform, not a basin) from the San Juan Basin, while the southern boundary of the watershed extends to the Cerro de la Garta Ridge of the northern Jemez Mountains’ Valles Caldera. The eastern boundaries are the Tusas Mountains and Black Mesa. The watershed is cradle shaped and is almost entirely within the political boundaries of Rio Arriba County, with only a small portion extending over the Colorado border.

In all, the watershed covers 3,075 square miles and includes Ohkay Owingeh and Santa Clara pueblos in the south, portions of the Jicarrila Apache Indian Nation in the north, as well as the towns of Vallecitos, El Rito, Abiquiu, Coyote, Canjilon, Cebolla, Canones, Tierra Amarilla, and Chama. All of these towns, reservations, reservoirs, forests and tributaries are considered integral to the watershed ecosystem.

What cultural influences have operated on the watershed historically? 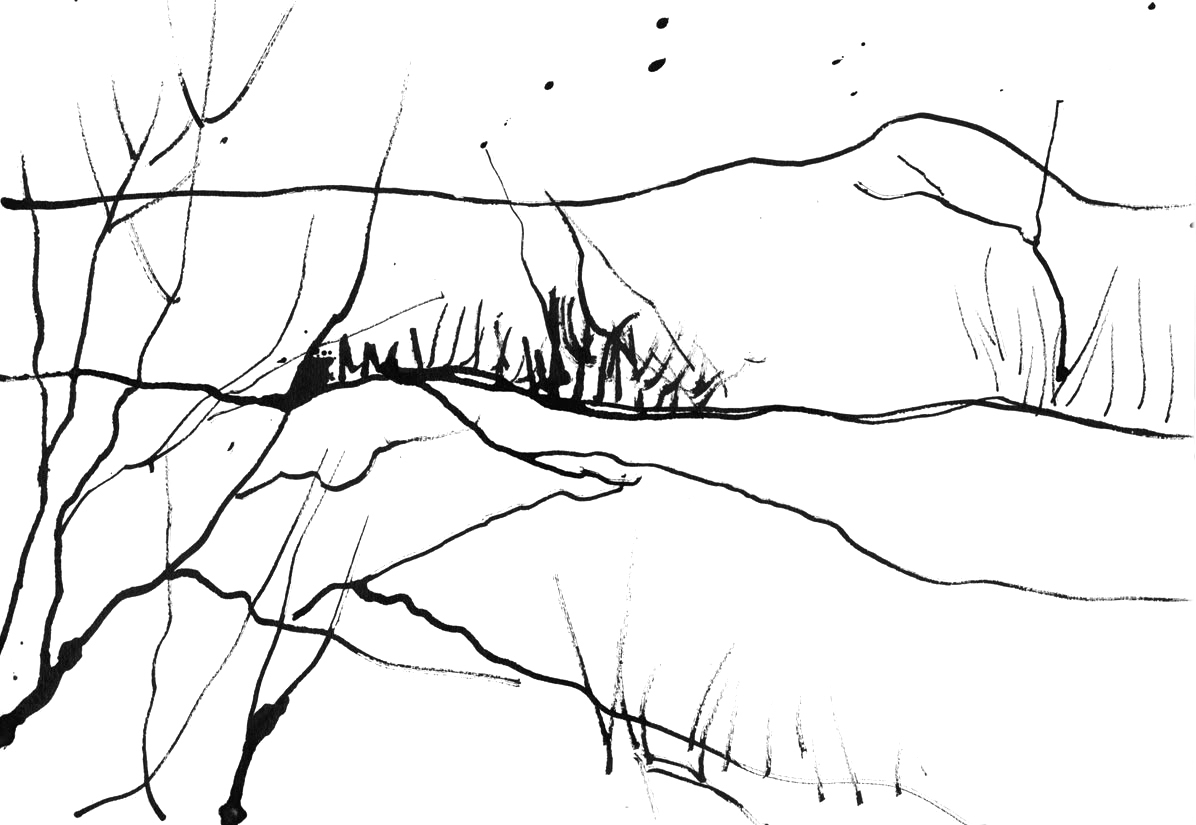 The original inhabitants of the Rio Chama Valley were Indigenous Anasazi Puebloan seed gatherers and hunters from the Chaco area who arrived here as long ago as 3,000 B.C. By the 1300s villages appeared in the southern watershed. The name Chama comes from an Indian pueblo called Tsama near Abiquiu along the north side of the river near its confluence with the El Rito creek. In the Tewa language, Tsama is defined as “wrestling place” or “fighting around place”.

Agriculture in the area began with the planting of corn in floodplains where the water table was higher or on terraces above the river using a dry-land farming technique. Little if any engineered irrigation by official canals or ditches was practiced, although methods of using runoff from mesas, rock-lined mulching and rocks used to direct water, was put to advantage. Larger pueblos raised squash, beans, and pumpkins as well as corn and even cotton. Puebloan cultures have profound religious beliefs around this life sustaining water and even today, practice religious dances and ceremonies to insure its arrival. By the 1500s the Apachean or the people we call the Navajo also formed settlements in the upper Chama valley. The name Navajo may come from a Tewa phrase that means “place where they plant fields”. These Indigenous Nations and Pueblos hold “first rights” to water.

The next arrivals in the valley were Spanish settlers. Between 1590-1846, these settlers (largely with the subjugated labor of the Pueblo Indians in the case of the southern watershed’s largest acequia project) built hundreds of community irrigation ditches called acequias and began to modify the terrain of the watershed, planting vegetables, grains and fruit (our first apples!) and introducing livestock into the watershed commons. Multiple origins and influences are evident in the acequias of today and include traditions from the Roman period, the influence of Arabic culture from the Moorish occupation of Spain, and finally, and importantly, the influence of Pueblo Indian culture and their watering and irrigation techniques. With these original Spanish settlers and this system of acequias came strong land and water ethics in the form of a Spanish document called the Laws of the Indies, which dictated ethical land-use practices. These ethics were also a part of the Spanish and Mexican land-grants which came with requirements for healthy land use. Estevan Arellano, in his studies of agropastoral farming and acequia culture on the upper Rio Grande, concludes that the Laws of the Indies reinforced the relationship of water, land and culture that evolved in our region.

We are the gatekeepers

Our actions, as inhabitants of this watershed ecosystem, have a profound effect on its health and the ability of the watershed to provide not only for us, but for the larger hydrologic basin we are a part of. About 90% of the water that originates in the Rio Chama watershed flows out of the region for downstream use while the 10% we use within the watershed is for domestic and agricultural, as well as evaporation and riparian purposes. Practically speaking, we are the direct beneficiaries, as well as the gatekeepers, for this precious water resource as it travels south to Espanola, Santa Fe and Albuquerque.

Help us keep this beautiful land and water pristine for another 100 million years.