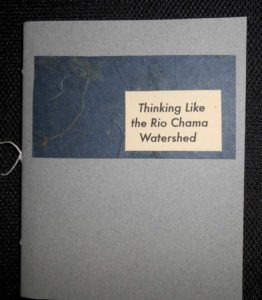 A successful Community Solar Forum, organized by RACC board member Cinda Graham (thank you Cinda!), took place at the El Rito Community Center on the evening of July 28thand brought in an audience of 30 from the surrounding area. Several watershed community members (Bill Clark, Bruce Smith, Susan Kazwierski, Barbara Turner, and Bob Harris) shared their personal experience with going solar on their property, talking about the specifics of their chosen systems as well as what spurred them to join the new energy economy and go solar.

The forum presentations were followed by many questions, mostly about grid-tied solar arrays that are connected to a local utility verses independent, off-the-grid systems that rely on storage batteries. The advantages and disadvantages of each led to a lively exchange and everyone left with a little more knowledge about what system would best suit their needs.

How different electric utility companies operate in the New Energy Economy was also a hot topic. Some utility companies, like Kit Carson Electric, are embracing solar energy’s rise and are developing a friendly relationship to grid-tied individual rooftop solar. Other local utility companies are not on board yet so having an independent system might make more sense.

For more information and links to educational websites that you might find useful if you are curious about solar, or even better, considering going solar, we will eventually add more links and information to the RESOURCES section of the RACC webpage.

Lets go solar in the Rio Chama Watershed! With oil and gas as the standard default for energy production for many, many years in New Mexico, we now have an opportunity to support and access a clean, and ever cheaper, energy alternative. It’s time to take the leap and go solar!

RACC has successfully distributed 85 copies of a handmade chapbook about the history of the Rio Chama Watershed. This 32 page book written by Barbara Turner and beautifully illustrated by well known artist Julie Wagner, also includes a chapter on the dangers of fracking in this unique watershed.

This chapbook would not have been possible without Julie’s knowledge and interesting execution of the book-making arts. Thank you Julie for the passion and skill you generously offered for this watershed project! You can visit her studio online at http://juliewagnerstudio.com, or you can visit her studio in El Rito most First Saturdays of the month from 10-5. Thanks also to Ginger Legato who offered her skill with the interior design of this chapbook and Clare Price for editing help. Finally, thanks to the “bindistas” (Caroline Wareham, Julie Wagner, and Cinda Graham), watershed women who rise to the surface when yet more chapbooks need to be made.

We are happy to report that we are now making more copies and would love for every watershed resident to own one. We are asking for a suggested donation of $20.00 to help fund RACC’s projects like the recent Community Solar Forum and the making of this educational chapbook. Please send a check written out to Luciente, our fiscal sponsor, and mail to Barbara Turner, PO Box 261 El Rito NM 87530. Please note “rio book” in the memo line and tell me where I should send the book. Luciente will send you a receipt for your donation. Thank you!

Geothermal Development Update For Our Watershed

The Forest Service just issued a news release with the information that, at the request of the public, an additional meeting has been scheduled in Albuquerque regarding proposed geothermal development in the Santa Fe National Forest.

The Forest Service is soliciting public comment on the Draft Environmental Impact Statement (DEIS) which can be found at  http://www.fs.usda.gov/santafe/ under Alerts and Notices. As a result of adding a new public meeting, the deadline for your comments has been extended to October 28th, 2016.

The public meeting held in El Rito last month was well attended by watershed residents from the surrounding area, including residents of the Santa Clare Pueblo and board members from RACC.Virtually all of the community members that spoke up vocalized serious concerns about noise pollution, skyline disturbances around Abiquiu Lake and Pedernal, increased traffic, and water use.

While the project will have to jump through many bureaucratic hoops before it is approved, now is probably the time to voice any concerns. RACC has discovered in our dealings with oil and gas development that it is best to speak up early.