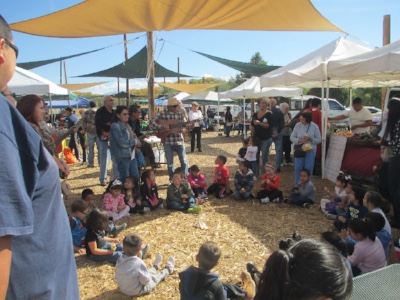 There is a certain poetry about walking into a farmers’ market. Like with the reading of a poem, you hope for beauty, surprise and locality and before you know it, and several interesting conversations later, you are carrying a jar of fragrant local honey, an exotic looking green-striped squash grown for generations by one family, freshly wildcrafted medicinal osha root, local green chile and more.

Healthy watersheds play an essential roll in making local food markets thrive. Farmers are key stewards of our water and understand on an intimate, detailed basis where their water comes from and how to manage it (you can link to an article about our current drought and farming in NM here) as they turn water, good soil and seed into food to nourish our bodies. By supporting our local farmers we are encouraging their healthy land-use practices which in turn benefits the watershed. The local Española Farmers’ Market is just downstream from the Rio Chama Watershed and awaits you!

Starting in mid-June the market is open for business and invites you to wander through and immerse yourself in the culinary and medicinal treasures of the Española valley and surrounding area. The following informative piece about the market was written by the market’s hard working manager, Sabra Moore. Pictures are courtesy of the Española Farmers’ Market.

The Espanola Farmers Market is entering its twenty-third season as a local growers market and serves as a nexus for the agricultural economy of the region. The Market is located on over three acres at 1105 North Railroad Avenue and hosts over seventy growers on Mondays and Fridays during a five-month Market season. There are twenty-one Monday Markets, 10am- 5pm mid-June through October. We often average thirty growers in attendance for Monday Markets. We have a rostrum of over 110 farm families who participate as harvest allows. Visitors include customers who shop weekly, tourists, college students, young mothers and their families and school children on class tours. We estimate that over 1,000 people visit the Monday Market daily. The growers come from many locations- Chile, Chamita, Abiquiu, Velarde, Tierra Azul, Alcalde, Chimayo, Santa Cruz, Sombrillo, La Mesilla, Española, Peñasco, Santa Clara, Chama, Dixon, Hernandez, Nambe, Embudo, etc. Some are local Norteños from traditional farm families and others immigrants from some of the rich agricultural regions of Mexico. Our customers know they are buying the freshest local fruits and vegetables at fair prices; visitors can find the expected- melons, apples, squash of every variety, greens, corn, chile, onions, beets, turnips, herbs, peas, beans, etc.- and the unexpected- quelites, and other wild greens in season, medicinal herbs such as osha, grass-fed lamb, heirloom varieties of squash, chicos, horno bread, pastelitos, cota tea, local honey, handmade soaps and native salves. Some growers plant with heirloom seeds that represent five generations of selection.

We obtained our permanent site through a NM State Legislative appropriation in 2007; our fiscal sponsor is Northern New Mexico College. We are the only market in the state with irrigation rights, so in addition to the vendor plaza, we cultivate gardens and crops in two other areas. For the past six years, we have partnered with various community groups to cultivate organic crops in the community field in back of the vendor plaza, including a project between elders and youth under the aegis of Tewa Women United and a native corn field with both red and blue varieties cultivated by residents from New Moon Lodge, a rehabilitation facility for Native men recovering from drug or alcohol abuse. The philosophy of healing at New Moon Lodge is based on returning to traditional cultural practices. We also have a wildflower garden at the Market entry with eight oval garden beds. Any community member can apply to “adopt an oval” and plant flowers or vegetables in that bed. (One or two ovals are available for adoption for the 2018 season). The horno near the acequia was built by students in 2008 under the mentorship of Dexter Trujillo of Abiquiu.

The students made the adobes on site and each year, thanks to a grant from Vanguard Charitable Trust, the Market employs six students who work for ten Market Mondays, cooking in the horno. Mostly they cook pizza, but Dexter also teaches them how to roast corn, chiles or squash and bake pies. The students return to assist during the two fiestas in the fall.

The Market is both an economic engine and a cultural institution. Last summer, based on vendor surveys, the farmers at Espanola Farmers’ Market earned more than $156,000.00 in sales of fresh vegetables, benefiting the economy and the physical and cultural health of our community. The Market has many programs that help low income customers shop for fresh produce. In 2017, EBT/SNAP sales totaled $11,675.00 with matching DUFB sales that double the value of food stamps redeemed at $10,311.00. Families and seniors redeemed $8,770.00 in WIC and Senior WIC checks through the Farmers Market Nutrition Programs (FMNP), making a total of $30,756.00 in free food distributed to eligible customers. Farmers also benefitted from the additional purchases funded through these programs, and the environment benefits from the traditional “natural” cultivation practice of most Market growers.

We also sponsor special events, such as our annual Biggest Vegetable & Best Poem Contest, with prize ribbons for the vegetables and poems and the annual Labor Day Chile Fest  featuring stories of the sources of heirloom chile seeds planted by many local vendors. We also produce a yearly postcard that is distributed free at the Market; many vendors pictured in the first postcard in 1999 are still selling their produce in Española. Over the years, artist and manager Sabra Moore has often collaborated with poets Joan Logghe and Beata Tsosie-Peña to produce A Farming Chapbook photocopier book with poetry by local students. Moore has organized two Farm Shows at the Bond House Museum in Española. For each show, she invited ten artists to interview twenty farmers and collect their farm stories, then created farm story banners, each 1-ft. x 8-ft. with digital prints of the stories and family photos.The artists then made artworks in response to the stories; the artists went to the farms, and the farmers came to the museum. There are now 32 farm story banners; selections of these stories have often been reprinted in the Seed Broadcast, a bi-yearly journal on agriculture and culture. We have a weekly free children’s book exchange and distribute over one thousand books each season. We host Don Bernardo y los Ultimos, a group of local musicians playing accordion, fiddle, bass and guitar at midday throughout the season; musicologist David Garcia and Jeremiah Martinez often play during early afternoons.

The Espanola Farmers’ Market gives local farmers a viable outlet for their agricultural products that allows them to stay in the valley, maintain the traditional acequias and preserve the farmland for productive use. Some of our growers are retired teachers or military veterans who have returned to farming after retirement; others are young farmers or chefs. It is also meeting place where people from  a wide variety of cultures can come together over the very old enjoyment of local food.

Senators Udall and Heinrich recently introduced legislation aimed at protecting Greater Chaco but local leaders and advocates, including RACC, say it is falling far short of meaningful protections. The legislation proposes to withdraw federal minerals within a 10 mile buffer around Chaco (the “Chaco Protection Zone”) from future oil and gas leasing, but according to the Greater Chaco Coalition, does little to protect the Greater Chaco Landscape, Chaco outliers, and ignores landscape-level management.

Any Rio Chama Watershed parcels which are considered to be part of Greater Chaco, would not be given any protection from oil and gas development as a result of this legislation.

Over 100 organizations and over 400,000 individuals have demanded an immediate moratorium on all leasing and drilling activities in Greater Chaco.

We have noticed lots of articles recently about the oil and gas boom in New Mexico. One article stated that the Permian Basin (southeast New Mexico is a part of this basin) could become the world’s largest oil play in a matter of a few years. As a result, this “oil patch” will also become a very major source of greenhouse gas emissions along with all the known local environmental risks associated with fracking. You can link to a recent Albuquerque Journal article on New Mexico’s San Juan and Permian Basin oil booms here.

If you want to read about the Texas Oil Boom in order to envision what New Mexico may be heading for as it reaches for the number one spot, check out a well written New Yorker article entitled The Dark Bounty of Texas Oil piece here.

Back to local boom news, the Albuquerque Journal recently reported on methane regulation in the state.  Apparently New Mexico is missing out on an estimated $240 million dollars annually as a result of flaring, leaking and vented natural gas. Check out the article entitled, Debate flares over BLM methane regulation, here.

Finally, here’s a recent report from Physicians for Social Responsibility informing us in a highly detailed report, that yes, fracking is not worth it. You can link to their report here.

Did you know that fresh water accounts for only 2.5% of the water on earth? Only 0.3 % of that is in easily accessible lakes and reservoirs like Abiquiu Reservoir and river systems like the Chama River. A precious resource indeed. Check out the definition of the hydrosphere here and be amazed.

Event at the Sheraton Airport Hotel at 2910 Yale Ave. SE

8:30am – Rally & Coffee – (industry can lease lands for cheaper than a cup of coffee)

9:00am – Press conference with speakers on the local and national impacts of lease sales and rock bottom royalties

9:50am – Walk into the formal public comment period silently together (Please wear white to symbolize SOS on this issue)

10:00am – There’s only half an hour of formal public comment so we’ve asked select speakers to comment.

10:30am – Walk silently out together (this is when public comment ends)