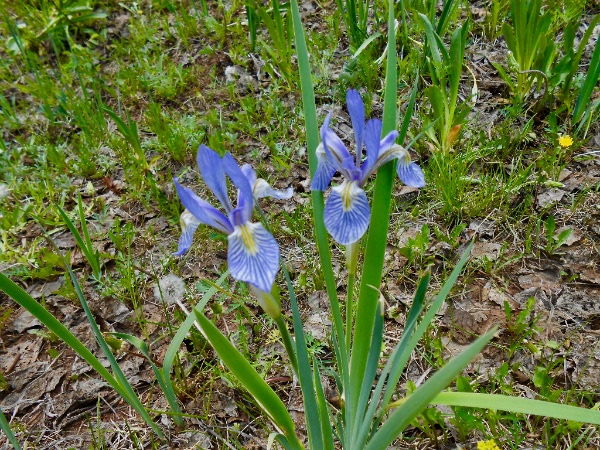 by RACC board member Barbara Turner

Both of these amazing places are very near the existing oil and gas leases on the border of the Rio Chama Watershed (no permits to drill have been issued so far). I can personally tell you that we would be risking a lot in the way of beauty, clean and abundant waters, and open wilderness if the oil and gas industry were allowed to proceed with plans to drill near these unique areas.

I went on two different exploratory trips recently so I could ramble around in these unsurpassed, watershed landscapes. Both explorations had me wandering the southwestern regions of the Rio Chama Watershed in inspiring places that I will want to return to again and again.

My husband and I chose to enter the San Pedro Parks Wilderness via the Corralitos Trail and almost immediately found ourselves traversing several meadows with a peak bloom of literally hundreds of art nouveau-blue Rocky Mt. Iris. Deeply shaded Aspen forests interspersed dense stands of Engelmann spruce and mixed conifers with luxurious grasslands in between. One chalky white Aspen trunk carried the carved words: “Jesus is a cattle”, and after touring through this museum of carvings, while wading through the iris bloom, we realized many of these messages from decades back indicated that this particular place in the San Pedro Wilderness has long been considered spiritual in nature by locals.

Water was abundant as we followed the iron colored Corralitos Creek, which was decorated with overarching currants and a white flowering shrub I’d never seen before. On a Sunday we saw only two women on this trail, making their way down from 10,000 feet on sable colored horses. The experience of this trail was ethereal and almost mystical, like something out of the fairy tales that my mother used to read me as a child. I fell in love with the deeply atmospheric natural world through those tales.

The San Pedro Parks Wilderness was designated in 1964 and it now has a total of 41,305 acres, some of which is in the Rio Chama Watershed. All of this land is currently managed by the U.S. Forest Service. They will need our guidance, as citizens of the watershed, to truly protect this special place.

The Rio Gallina Canyon was an entirely different experience. It’s not far from the Chama River and access to a really nice section of the Continental Divide trial. The only way to hike this canyon was to rent a place to stay from the private landowners of Gallina Canyon Ranch, who farm and ranch in the canyon itself.  Famous for their historic farming of 600 different types of beans at one point back in the 80’s, the owners now run cattle alongside a more modest vegetable garden.  A friend and I rented a cabin that came with an open air sleeping platform, complete with 2, four poster beds and a telescope, a distance above the canyon floor and the ranch.

Gallina Canyon is extremely steep sided and after waking up on the sleeping platform beds in the moist morning air and listening for awhile to the trilling of hummingbirds and the crowing of a few roosters down at the ranch, we took off on a hike across the canyon. After a climb up the opposite canyon wall, we found a disintegrating Anasazi ruin that the ranch had told us about and then continued on as far as we could up the canyon wall to some dramatically striped rock overhangs. With the Gallina River flowing below through the canyon floor, we could picture an indigenous culture able to meet their basic needs of water and protection. The geology of the canyon was laid bare in huge rock falls and formations on either side of the narrow canyon and proved endlessly watchable.

The folks at the ranch had found a way to make their private land accessible while at the same time offering a “glamorous camping” experience that seemed to suit the beauty of the canyon. Fresh eggs were involved!

Both adventures confirmed for me that we are living in a unique watershed, one that needs protection. We are the gatekeepers of this magnificent landscape, one that can slake our thirst, give us food, and offer us the spiritual connection to the natural world that we all need in this life. It is ours to protect. Go explore!

Curious to Know Who We Are?

We thought you might like to know more about the individuals on the RACC Board of Directors. We come from all kinds of backgrounds and find that the diversity on our board only strengthens our ability to work effectively as volunteers in your community in our ongoing effort to protect and promote the Rio Chama Watershed.

William Clark (acting President of RACC) was born and raised under the Wasatch Range in Salt Lake City, Utah and he has always had a passion for the wilderness.  His father’s trucking business gave him insights into the more toxic side of the petroleum industry. When, in 1992, he moved to Cebolla, New Mexico he knew that he had found his home.

In October of 2012 he became actively involved with the Bureau of Land Management’s January 2013 Oil & Gas Lease Sale in Cebolla. The oil & gas industry expressed interest in 16 parcels in Bill’s “back yard”, and his first worries were what effect that development would have on water and air quality.  Working with other interested parties, and with the National Environmental Policy Act of 1969, they followed guidelines that lead to the eventual action of “indefinite deferral” for these 16 parcels in Cebolla. The BLM supported this action with studies dealing with the oil & gas potential in the greater Rio Chama Watershed.

Bill believes that Rio Arriba Concerned Citizens is a strong voice for the pristine nature of the Rio Chama Watershed.

Henry Ochoa has been an El Rito community member for 40 years and at one point was the postmaster in town. He has been actively and effectively  involved in politics for 20 years on the local, county and state levels and served on the Planning and Zoning Commission. One of his first successful political acts was the protest of Uranium mining in the El Rito Watershed. His main focus and passion has always been protecting our water resources.

Rebekah Henty is an Australian/American and has spent her career working in the healing arts and fashion equally. She first came to New Mexico in 1995, fell in love with it and returned to create a home base in 2013. Her service is to bring environmental and healing values into the fashion work that she does.

Cinda Graham is an artist. She moved to Abiquiu from Rochester, NY, in 2012 and she has shown her work in both Rochester and New York City.  She was on the Board of the Rochester Contemporary Art Center for 10 years and served as Chairman for 5 of those years. She is a graduate of St. Johns College, Annapolis Campus.

Barbara Turner is a former bookstore owner with a BA in English Literature. She has lived alongside the El Rito bosque for the past 10 years and writes for RACC publications including their bi-monthly newsletter and the Thinking Like the Rio Chama Watershed chapbook that was published and distributed in 2015. She also does artwork influenced by the wild and beautiful El Rito bosque.

Peggy Baker was an environmental scientist for 25 years and has been involved in writing and reviewing Environmental Impact reports. She has a BA in physics and a Masters in Environmental Engineering and Water Resources, as well as a certificate from the University of California in Alternative Dispute Resolution.

She has been leading initiatives for expert review and public participation in fracking and public land use.

Rio Arriba Concerned Citizens has been around for several years now in our community and, with your involvement, we have successfully helped to keep oil and gas interests from developing any parcels in the Rio Chama Watershed. We have a “small but mighty” board of directors who have been meeting monthly for years, dreaming up ways to protect and promote the watershed, and then going out into the community and doing the work.

We are now attempting to move RACC to the next level and that involves you! While potential oil and gas development in the watershed will always be our key concern, we feel it is time to ramp up our energy behind promoting education and jobs that will help this watershed move into a sustainable, livable future. We don’t want to simply be against oil and gas, but also for the kind of future that has the youth in our community gainfully employed in the new energy economy, an economy that will ultimately protect all of us, and our watershed.

To this end, we are developing plans for a Solar Jobs Forum, as well as a complete revamp of our website (which is currently moving toward revision). These new plans reflect a refocusing of RACC’s energy toward jobs and education. These both require some financial backing and we are encouraging you to pitch in financially, if you can, so we can evolve and continue the work of protecting this watershed.

We have been able to do a lot with very little cash so far with projects like BLM, Forest Service and other community organization outreach, letter writing campaigns, educational publications like the Thinking Like the Rio Chama Watershed project and our bi-monthly online newsletter, our educational website, and importantly, a successful Solar Use Forum which we held last summer. Many thanks to all of you who made financial contributions that made it possible for us to succeed with these projects.

We are setting the goal of raising $2000 dollars in the next 2 months so we can realize our new projects. One of our board members, Peggy Baker, just donated $600 in seed money (thank you Peggy!) to get us started. Can you help out with the remaining $1400?

Go to www.rioarribaconcernedcitizens.com and click on our orange donate button, or send a check to PO Box 12, Abiquiu, New Mexico, 87510. Please make your check out to our fiscal sponsor, Luciente, and you will receive a receipt in the mail for a tax deduction. Please write “RACC” on the memo line of your check.

Thank you for your ongoing efforts to protect the Rio Chama Watershed!