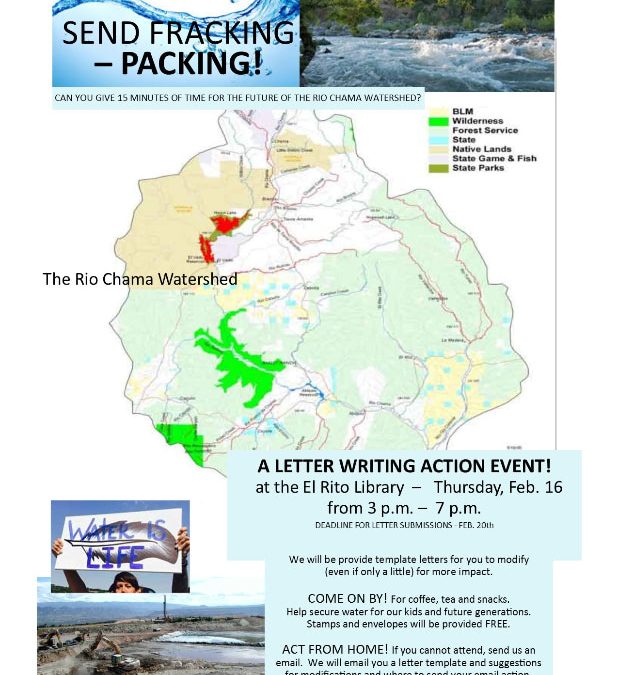 Many thanks to Carolyn Riege and Norbert Hufnagl, partnersin Earthen Touch Natural Builders, for planning and hosting this important watershed event. Please stop by and join us in speaking up for the Rio Chama Watershed!

Governor Martinez continues to fuel widespread concern about the amount of influence the oil and gas industry has in her administration.

She recently appointed Ken McQueen as the new head of the New Mexico Energy, Minerals and Natural Resources Department (EMNRD). This is the state agency tasked with developing energy technologies and protecting New Mexico from the environmental impacts of mineral extraction.

Ken McQueen was most recently the VP of WPX energy—the same oil company whose 36 oil storage tanks caught on fire over the summer in the San Juan Basin, forcing 55 residents to evacuate their homes. San Juan Basin residents, as well as Rio Chama Watershed residents, are currently submitting comments to the BLM regarding out of control oil and gas development in the Greater Chaco and northwestern New Mexico area.

Martinez states that she wants an all-of-the-above approach to energy development in New Mexico. To make this a reality she would need to forcefully support renewables that create steady, good paying jobs in the clean energy sector instead of pouring millions of tax dollars into the dying fossil fuel industries and their inherent boom-and-bust cycles.

The Santa Fe New Mexican recently reported that most of he state’s top oil and gas producers “fared poorly” on a new national report that rates fracking operations and the environmental risks they pose. The “Disclosing the Facts Fracking Scorecard”, released by investor and advocacy groups, ranks oil and gas companies yearly, based on their public disclosure of toxic chemicals, water consumtion and quality, waste management and other effects on communities and the environment. Eight of New Mexico’s top ten oil and gas producers received low or failing scores.

How can we expect an oil and gas industry executive to hold his friends and colleagues accountable for protecting our air, land, water and health here in the Rio Chama Watershed?

Exciting solar news from a watershed resident up near Heron Lake, who just became NORA Electric’s first grid-tied solar power customer. Natalie came to Rio Arriba Concerned Citizen’s Solar Forum last summer in El Rito on an information gathering mission, and walked away with knowledge that informed her decision to go solar with an electric company (NORA), who in the past has been very resistant to grid-tied, rooftop solar. Read her account here and dream up your own going solar adventure. The time is right!

My Experience with NORA November 2016

Rio Arriba Concerned Citizens welcomes your volunteer energy! Please contact Barbara Turner at barbaraturner9@yahoo.com if you would like to work as a volunteer. We are currently in need of people knowledgeable about social media, solar power, and local, sustainable job creation.