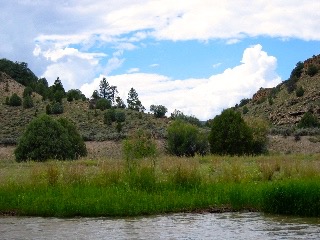 The status of the BLM’s Cebolla parcels has been updated by Brad Higdon of the Taos BLM Field Office. According to Brad, these parcels are now on “indefinite deferral”. While the BLM has the Mineral Potential Study from Joseph Hewitt, it has not begun the Hydrology Study the Taos Field Office requires to determine the final status for these parcels. The Hydrology Study is required before any final decision can be determined.

The BLM has a few potential final outcomes in mind for these parcels. The first one would leave these parcels in an “indefinitely deferred” limbo until more information determines a final decision. In the second outcome the Taos field Office would put the parcels back up for lease sale with the knowledge that they must go through the entire NEPA process again. The final option would be to subject these parcels to a “land use” placement in the Resource Management Plan and remove them from future lease sales.

The best-case scenario for the Rio Chama Watershed and the residents of Cebolla, is that these parcels will be subjected to a “land use” placement and be removed from future oil and gas lease sales. We will keep you updated as we continue to put pressure on the Taos Field office to make this final determination. We believe that a “land use” determination would set a strong precedent for future sales with the BLM, the State of New Mexico and Private Land owners as well.

Many thanks to the pro-active Cebolla residents who love their land and their watershed and made their voices heard early on. With their foresight, and a watershed community which continues to rise to the occasion in such an impassioned way, we have a real chance of influencing a good final outcome.

Geothermal Energy Development Has Been Proposed For Our Watershed

The Santa Fe National Forest and the BLM are proposing geothermal energy development in our watershed.  The deadline for EIS comments from anyone concerned about this proposal was extended until June 26th due to requests voiced by concerned citizens at two SFNF informational meetings held last month. Speaking up early on will give us more influence as they move toward a final determination, so thank you to those who spoke up early on and requested this extension for public comment. Forty-six thousand acres being proposed are within the Rio Chama Watershed.

According to The Union Of Concerned Scientists, geothermal energy has been used for thousands of years and is basically power derived from the Earth’s internal heat contained in the rock and fluids beneath the earth’s crust. To produce geothermal-generated electricity, wells, sometimes a mile deep or more, are drilled into underground reservoirs to tap steam that drive turbines to electricity generators.

Geothermal power plants can impact both water quality and consumption. Hot water pumped from underground reservoirs often contains high levels of sulfur, salt, and other minerals. There have been no officially reported cases of water contamination from geothermal sites in the U.S.

Water is used by geothermal plants for cooling and re-injection. Depending on the cooling method used, these plants can require between 1,700 and 4,000 gallons of water per megawatt-hour. However, most geothermal plants can use either geothermal fluid or fresh water for cooling. The use of geothermal fluids rather than fresh water clearly reduces the plants overall water impact. Outside water is required however for maintaining a constant volume in the geothermal reservoir as some water is lost through steam. Non-potable treated wastewater is one option and has been used historically at some, but not all, U.S plants.

In the closed looped, binary system, gases removed from the well aren’t (theoretically) exposed to the atmosphere and are injected back into the ground, so air emissions are considered “minimal”. In direct steam or flash open loop systems, hydrogen sulfide, carbon dioxide, ammonia, methane, and boron can be released into the atmosphere. It is unclear which technology would be used in geothermal development in our watershed. Hydrogen sulfide, which has a distinctive rotten egg smell, is the most common emission, and changes to sulfur dioxide once in the atmosphere. Heart and lung disease in humans, and acid rain, which damages crops, forests, and soil can result. Some geothermal plants also produce small amounts of mercury and a watery sludge of heavy metals, which necessitate disposal at hazardous waste sites. And, of course, there are some emissions associated with plant construction and surrounding infrastructure.

As far as land use issues are concerned, many geothermal sites are located in remote and sensitive ecological areas. Geothermal is very location specific as only certain geological formations have potential for this type of energy development.  Land subsidence is one phenomenon in which the land surface sinks. This is sometimes caused by the removal of water from geothermal reservoirs.  Most geothermal plants address this by re-injecting wastewater back into the geothermal reservoir after the water’s heat has been captured. There is also a risk of earthquakes if plants are located near fault lines, so this is also an area of concern for the Rio Chama Watershed.

We will continue to gather information and keep you informed on this proposal and what opportunities there will be to make your voices heard. Just as we are watching these ominous and beautiful summer storms move in and out of our gardens, our skies and our watershed, we have to, all of us, pay attention and send our concern, our work, and our energy out into the watershed community to protect the place where we live.