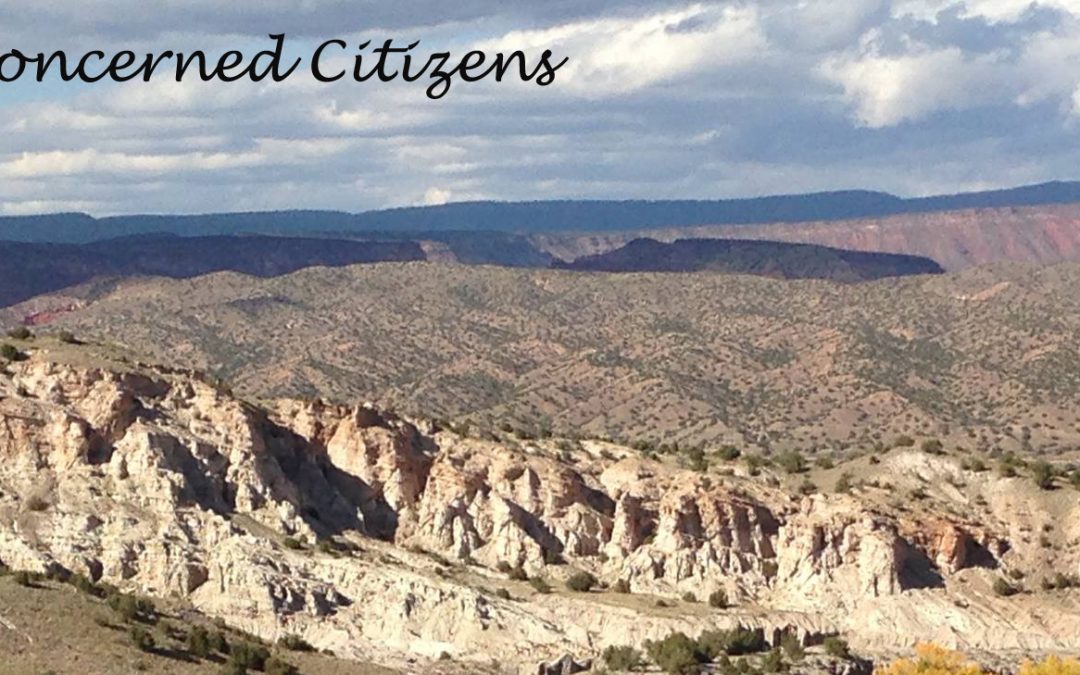 “To protect the public health and land, air, and water of the Rio Chama Watershed, Rio Arriba County, and the State of New Mexico, and to promote sustainable development through education, collaborative planning, community action, and policy advocacy”

IT’S NOT OVER YET!  BLM LEASES PARCELS, BUT HAS NOT SOLD THEM.

Despite hundreds of letters of protest from concerned citizens as well as incomplete and inaccurate environmental studies, the BLM announced last week that it will begin to lease all 13 parcels (almost 20,000 acres of Public Land) in the Santa Fe National Forest in the Rio Chama Watershed.

WHAT IS THE DIFFERENCE BETWEEN A LEASE AND A SALE?

We have been fighting and protesting what has been referred to as the October 22, 2014 Oil and Gas Lease Sale, but we have learned recently that the lease and the sale are two different events.  The BLM has announced it will lease the parcels, which means that oil and gas companies will commence to bid on them and pay a deposit for their use.  Actual oil and gas exploration can legally begin only when the sale has been completed.

YOUR LETTERS ARE HELPING!

Because of the protest letters you submitted to the BLM there is now a “Protest Cloud” over the Lease Sale.  According to the National Environmental Protection Act (NEPA), the BLM has until December 20, 2014 to clear this “Protest Cloud” before they can go ahead with the actual sale.  If the BLM decides that our protest has enough merit to postpone the sale the deposit given by the oil and gas companies will be returned.

In a full lease sale the BLM remains the property owner of the parcels and the “mineral estate” but sells a lease to the rights to mine this “mineral estate”.  The BLM in return receives rental payments as well as royalties to any and all oil & gas that is developed.

Even though you never received the mandatory response to your BLM protest letter, your opinions and the push-back by other conservation groups in our region have made a difference.

IS THERE STILL A WAY TO STOP THE SALE?  YES!

The Taos office of Western Environmental Law Center (WELC) has announced that it will spearhead a lawsuit against the BLM for “failure to consider the potentially serious impacts to the area’s air, water, wildlife and surrounding communities”.  Litigation will begin before December 20st 2014.

While the leasing of the parcels on October 22 is a disappointment and a dangerous precedent for our watershed, it may also be, in the bigger picture, a catalyst for serious legal challenge, scrutiny and protection against fracking in our area.

As a group, Rio Arriba Concerned Citizens is standing beside and supporting WELC in their initiatives along with other conservation groups including Amigos Bravos, Chaco Alliance, Earthworks, San Juan Citizens Alliance, WildEarth Guardians, and others.  The press release that WELC distributed regarding the litigation has already appeared in numerous news outlets and newspapers.  You can read the full text here

We will alert you via this Newsletter, our website, and Facebook page about any updates and actions you can do to support in this important unfolding process.

Free informative booklets detailing our counties history with oil and gas and our concerns about it are available at the Abiquiu Library, El Rito Library, and the Rising Moon Gallery.  Pick one up today!

Rio Arriba is the name of our county and our group but more then that it means “Up River” and is a reminder that in New Mexico we are “up river” and what happens here will affect many downstream. Get involved today.